Fahamu Pecou's work can be viewed as a meditation on contemporary popular culture. He began his career experimenting with practices employed in branding strategies, which led him to question the media's role in perpetuating certain racial stereotypes. He adopts popular representations of black masculinity in media and distorts or exaggerates them through appropriation. Pecou appears in his work not in an allegorical sense, but instead as a stand-in for the realities and fantasies of these representations. The end result is a parody on our culture's obsession with celebrity as well as its exploitation of black masculinity. 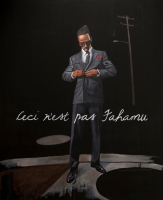