Philadelphia-based artist Tristin Lowe has experimented with unorthodox forms and materials and drawn inspiration from an eclectic range of literary and historical sources. He often creates inflatable forms reminiscent of parade balloons in their scale and "low-brow" spectacle, a playful and malleable take on monumental sculpture. "Mocha Dick" is a 51 foot industrial nylon and felt inflatable, a replica od the albino sperm whale that terrorized 19th century whaling vessels in the South Pacific and inspired Herman Melville's epic. "Folding Desk Chair" was created during Lowe's 2004 residency at Philadelphia's Girard College. It was inspired by the life of the school's namesake, Steven Girard, whose self-made merchant fortune was used to fund the construction and maintenance of the school for underprivileged children. The 23-foot-high timbers of the chair represent the masts of a ship while the canvas seat takes on the quality of a sail. 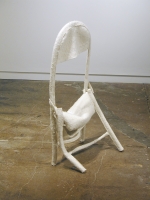