With a deft handling of the medium of pen and ink, New York-based artist Martin Wilner has established a bold signature style of stippled drawing resembling that of classic comic book imagery. His works are dense and detailed tapestries of faces, texts, textures and fantastically distorted objects often arranged in a grid-like formation to lend them a strong sense of internal logic. Upon further investigation, one realizes that this grid is in fact a calendar - for his ongoing "Making History" series he completes a drawing each day, inspired by newspaper articles he's read or websites he's visited that day. He embraces the chance and randomness involved in combining imagery in this manner, so that the finished drawings not only represent a month's work but effectively stand-in as diaries, records of his own experience of time passing. 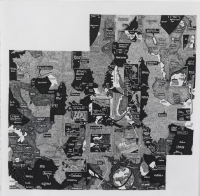 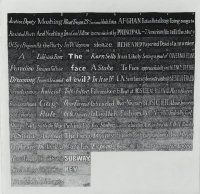 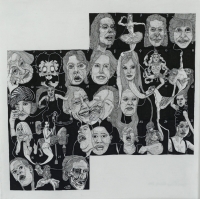