Photographer Chris Jordan has a deep interest in and concern for our contemporary global environmental crisis. In his ongoing series, "Running the Numbers: An American Self Portrait," he creates large-format photo collages that function as visual representations of troubling statistics for American consumerism. Each image contains a specific quantity of something representing a specific amount of time of United States' consumption. "Denali/ Denial," for example, contains 24,000 logos for the GMC Yukon Denali, equal to six weeks of sales of that model of gas-guzzling SUV in 2004. "Cans Seurat" depicts 106,000 aluminum cans, representing 30 seconds of U.S. consumption. These images are concrete where raw number statistics are abstract; Jordan hopes that these types of visual representations of data might be more effective at communicating the real meaning of these numbers and their dire implications. The size of these dense and intricate images, assembled from thousands of smaller photographs, serves to emphasize the enormity of the societal problems we are facing. 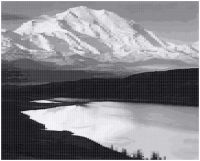