London-based artist John Timberlake's "Another Country" series draws from traditions of Romantic landscape painting, documentation of nuclear tests and techniques of amateur model-making. Within this framework Timberlake explores the contrast between the the truth-telling associated with historical dioramas and the romantic idealism involved in rendering landscapes. With the discovery of documentation of Britain's "Atomic War" tests he became fascinated with the notion of fictional wars, as well as the potent iconography of the mushroom cloud in a post-Cold War world. Timberlake mined hobby shops for materials to create the multifaceted dioramas that appear in his digitally-undisturbed photographs. The works resonate in a perceptual gray area between painting and photography, causing viewers to seriously question their previously-held understandings of truth and fiction. 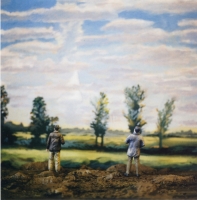 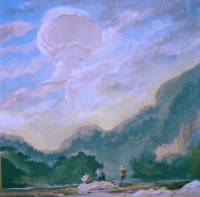 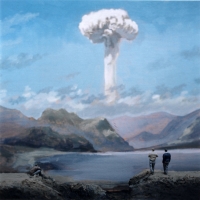