New York based video artist Eve Sussman parterned with the Rufus Coorporation (a creative "think-tank") to make "89 Seconds At Alcazar," a ten minute film installation from which the images below are taken. The film, a recreation of the moments leading up to and immediately following the scene from Diego Velasquez' masterpiece "Las Meninas (The Maid of Honor)," was included in the 2004 Whiney Biennial. Sussman thinks that '...painting has the cinema-verte quality that only a snapshot has... and it predates photography by centuries.' Sussman often translates well known masterworks into her large scale re-enactments. 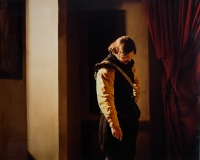 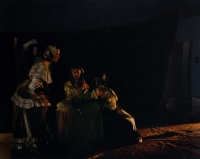 Girls In the Dark (Video Still) 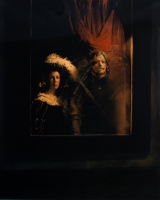