In his "Mobile Homes" series Brooklyn-based multidisciplinary artist Peter Garfield creates tiny, perfectly rendered models of mobile and suburban tract homes. He then flings them in the air and carefully photographs them against the backdrop of a vast sky. They veer wildly in the air, giving the impression that they've been swept up in a tornado, a sense that is heightened by the grainy film-still quality of the dynamic photographs and popular associations with films such as The Wizard of Oz and Twister. In fact, the photos contain no indicators of the real scale of the models so that an unsuspecting viewer might be convinced they were taken straight from an amateur's camera. The way that Garfield contrasts the recognizable reality of suburbia with these strange paranormal phenomena leaves a viewer feeling slightly anxious and thoroughly curious. 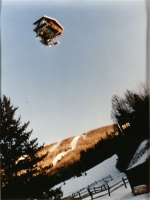