Nicholas Howey has a unique and recognizable style, which is characterized by applying paint on a canvas with his hands instead of brushes. Howey's abstract shapes appear to serve in a capacity similar to hieroglyphic symbols. The artist's use of shapes and colors as a means of conveying moods and feelings perform in a manner similar to the way a code or language would. The distinctly modern look of Nick Howey's paintings is defined by the bold color palette he employs and the studied, carefully plotted geometrical designs depicted on his canvases. 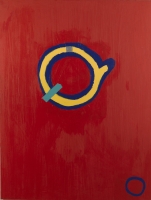