Craig Kalpakjian emerged into the New York art scene as a sculptor and installation artist during the early 1990s. He then began exploring photography and learned how to create digitally rendered landscapes on a computer using a technique called CAD, or Computer Aided Design.

The artist became adept at utilizing complicated software such as Form Z and Lightscape, which are the same types of tools used by designers who work on special effects for movies. Kalpakjian's images are simulations of the architecture of industrial offices, whose environments are perceived as places where sterility prevails. The spaces are familiar, but utterly unrecognizable in their anonymity. 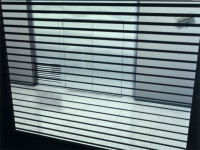