Using mixed acrylic media, Nina Bovasso produces works on paper and pantings comprised of compartmentalized motifs within precarious structures. In some works, Bovasso's motifs manifest themselves as complicated worlds of minutiae which cluster and disperse; in others, motifs are magnified in different spatial configurations. Unlike the flat homogeneity of the digitally produced imagery that pervades contemporary visual culture, her drawings explore surface as phenomenon; they possess a depth, texture, and materiality which grounds them in the real. 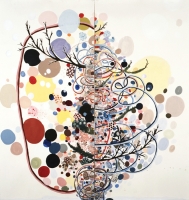 Girl With Green In Glue 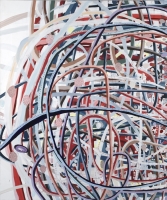