Over the past twenty years Andrew Bush has worked in a variety of formats, subjects and mediums but has continued to explore notions of identity in his many photo series. In his "Vector Portraits" series he captures people in their cars, all "while traveling 50 to 70 mph in Los Angeles and other parts of the Southwestern United States." More recently he produced a series called "Prop Portraits," shot with his usual large-format camera in the flea markets of Los Angeles. His subjects were selected from the crowd, holding their purchases, which begin to function as a trophy for their identity and passage through life. 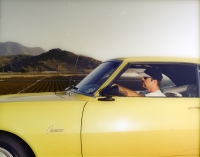 Man Travelling South At Approximately 73 mph , On The Golden State Freeway (Near The Grapevine) At Around 5:31 P.M. Sometime in the Summer of 1994 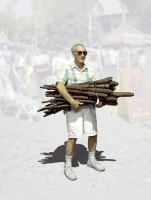 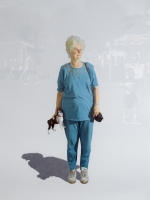