New York-based photographer Anna Gaskell has gained a great deal of notoriety for her narrative photography series in which she carefully photographs groups of girls as they act out popular stories from literature, folklore, and history. One such series, entitled "Wonder," earned Gaskell the Citibank Private Bank Photography Prize in 2000. In this body of work she carefully orchestrates photographs of two twin girls in a re-imagination of Lewis Carroll's "Alice in Wonderland." The collection of images do not function as a linear narrative, but rather offer disparate and alluring moments that resist logical chronology, allowing for a multitude of interpretations and metaphors. 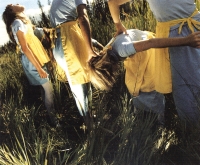 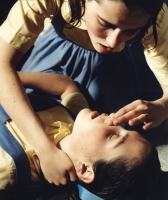 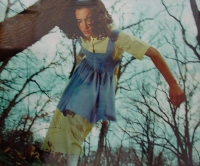